What will happen if a medical device is not having the desired sterility level and it is going to place in the human body as an implant? It will lead to an infection or in a worst-case scenario, causes death to the patient.

So, how we will avoid this and how will we know that the device is sterile? How do the manufacturers assure us that their devices are sterile as per the requirements? This is something looks interesting to know, right? Yeah, Sterility is considered to be a critical parameter and every manufacturer should take the necessary steps to achieve this.

It is defined as free from viable microorganisms.

It is considered the ability of microorganisms to survive and replicate under given conditions.

No, and it is not possible also.

Once we choose a sterilization method for a particular product, then the next question is, what are the other parameters we should consider for an effective sterilization process to achieve the desired bioburden levels?

It is the number of microorganisms contaminating an object.

What is this SAL?

A sterility assurance level (SAL) is defined as the probability of a single viable microorganism occurring on an item after completion of the validated sterilization process.

The nature of microbial death in any sterilization process is described by an exponential function. And the presence of viable microorganisms on any individual product can be expressed in terms of probability. As the process will not assure zero microorganisms on the product completely then this probability can never be reduced to zero.

SAL is considered as a target for any of the following sterilization processes using heat, chemicals, radiation, or a combination of these agents. It is generally expressed as the negative logarithm to base 10, i.e., 10-x.

Which SAL value should we consider for the devices to obtain CE mark or US FDA approval?

European Union harmonized standard EN 556-1 specifies that a sterility assurance level (SAL) of 10−6 or less (e.g. 10−7) should be achieved in order to designate a terminally sterilized medical device as sterile. In the USA, the American National Standard ANSI/AAMI ST67 specifies that a maximal sterility assurance level of 10−6 is required for the majority of terminally sterilized health care products.

Achieving the SAL value of 10-6 is the critical requirement for achieving CE Marking and US FDA Approval for most of the medical devices.

What if the medical device is unable to withstand a terminal sterilization process to achieve a SAL of 10−6? Can we choose another SAL as per the regulatory requirements?

Based on the intended use there is a choice to select the appropriate sterility assurance level for medical devices.

D-value refers to decimal reduction time (or decimal reduction dose) and It is the time (in minutes) or radiation dose required to reduce the microbial population by 90% or 1 log cycle (i.e., to a surviving fraction of 1/10), under stated conditions (ex. Temperature).

Considering this D value and bioburden of the manufactured product, the sterilization process is programmed in such a way as to reach the desired sterility assurance level.

As mentioned above, if the device is intended to be designated as sterile then it should reach a SAL of 10-6. Hence, while preparing the sterilization process of a particular medical device, the manufacturer should consider the microbial burden during the manufacturing process, material characteristics, and packaging materials, as these have an influence on the sterilization process.

When it comes to the safety of a device, we should never compromise. Right? 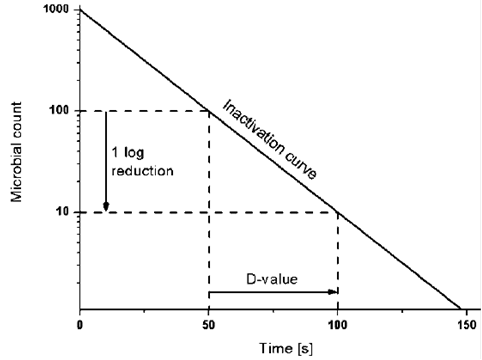 Mr. Manoj Meghavaram is a senior consultant in medical device Quality Assurance and Regulatory Affairs.  He specializes in quality management systems, biocompatibility, sterilization validation, and technical file preparation.  He wants to share his expertise with colleagues and well-wishers all across the world.
Previous Post CE Marking for Surgical Gowns and Drapes
Next Post EU Quality Management System Certificate